Why to learn Italian Sayings?

Sometimes, when you are learning a language you find yourself remembering the weirdest things, for instance Italian sayings or swear words.

Have you ever asked yourselves why?! Because laughing improves your memory – according to a 2014 Loma University research.   So now that even a study approves it, let’s dive into some funny Italian sayings!

As you’ll see Italian sayings come from Italian history, customs and culture. That’s why many of them are food related – Italians favorite ones – and few are in Latin – Italian kept several well-known Latin expressions for day-to-day use.

Here is a list of 20 popular Italian sayings and Italian idioms which will help you enjoy learning the language while sounding like a native. Literal: to give back bread for focaccia. Idiomatic: an eye for an eye, tit for tat.

This is the first ancient Italian saying of the list. As a matter of fact you can find it in Decameron by Boccaccio, from 1300. Since focaccia is a more elaborate type of bread, if you are giving back bread instead of focaccia, your intent is to make the other pay for an offense or a wrongdoing.

For example:
Ti rendo pan per focaccia  – An eye for an eye, for you!

Literal: to have pastry dough hands. Idiomatic: to be a butterfingers.

Because pastry dough is easy to crumble and break, this Italian Idiom is for someone who is clumsy and unable to hold something without dropping it or breaking it.

For example:
Hai le mani di pastafrolla  – You are butterfingers!

Take your Italian to the next level with private lessons from Lucia at Learn Italian Go.

END_OF_DOCUMENT_TOKEN_TO_BE_REPLACED

Literal: in wine there is truth. Idiomatic: wine makes people tell the truth.

The first saying in Latin is of course about wine and truth. Thus, its meaning is when you drink some wine and you’re drunk or tipsy, you’ll easily spiel the truth! This is a clear evidence, in fact, that wine has been a fundamental part of society since Romans times. Literal: what a pizza! Idiomatic: what a bore!

For Italians, pizza is a comfort staple food which is no news to them and therefore can be considered as very boring. Hence, use it to express boredom or annoyance.

Literal: to be like parsley. Idiomatic: to turn up everywhere.

If you want to let somebody know they pop up everywhere or are in the way, then this Italian Saying is what you’re looking for! In fact, parsley is a really common ingredient in many Italian dishes and so it can be found almost everywhere…

Gaia and Marco turn up everywhere!

Literal: to have a face of a boiled fish. Idiomatic: to have a slack-jaw.

As said, Italian sayings often use food expressions, in this case a simple boiled fish. So, if someone has a face of a boiled fish then means they look inexpressive, uninterested and uninteresting.

While I was talking, everyone had slack-jaw. A less aggressive way of saying “hell” or similar, it’s to use just a vegetable name! To clarify, cavolo is a cheap, not very appreciated produce and sounds almost like an Italian curse word. And there you go…Cavolo!

What the hell do you want?

Literal: to have salt in your pumpkin. Idiomatic: Have your head screwed on.

In Italian slang, zucca also means head. Moreover, if you are aware of sprinkling salt on pumpkins to balance their sweetness then you’re clever, at least according to Italian belief.

For example:
Dovete avere sale in zucca per avere successo Literal: to be good like bread. Idiomatic: to be a good egg, a good person.

This Italian Saying refers to someone good, nice, a person with a good heart. Bread has always had value in Italian diet and culture so much that it is considered the best food to be compared to – for an Italian, bread is always a good choice.

Your dog is really a good person, lucky you!

Literal: to have prosciutto over your eyes. Idiomatic: to have your head in the sand.

It’s clearly a figure of speech which means not to get the point or not to see what’s going on. In addition, it can also mean a voluntary state of distraction. Even this saying comes from old time, from the ‘800, and from regions famous for prosciutto production.

The teacher didn’t see anything. She had her head in the sand.

This Italian Saying is very common and indicates there’s no need for many words to understand something, when someone is wise and intuitive. As many of these Italian sayings, this has an ancient origin as well: it actually comes from a Latin comedy by Plauto. To know more about the author, please click this link https://en.wikipedia.org/wiki/Plautus

Did you understand? Word to the wise… You’ll say this to lazy people who sleep till late, and so cannot do anything all day like a fisherman asleep cannot catch any fish.

Literal: the wolf loses the fur but not the vice. Idiomatic: old habits die hard.

Originally, the protagonist of this Italian saying, from a Latin Suetonius’ story, was an actual fox, and it was referring to Roman Emperor Vespasiano, known for bad-temper and determined to reach his own goals at any cost. It means that it is very hard to eradicate old and bad habits, already part of our nature as it’s hard for the wolf to change.

Carlo is always the same. It is true that old habits die hard.

Like the English version, this saying means to achieve two goals with only one effort, and it’s used in the same sense. However, the difference is that in the Italian version instead of birds you have the more common pigeons, and instead of killing them, you just catch them – it was custom to catch wild pigeons with a big fava bean bait to have them for dinner. 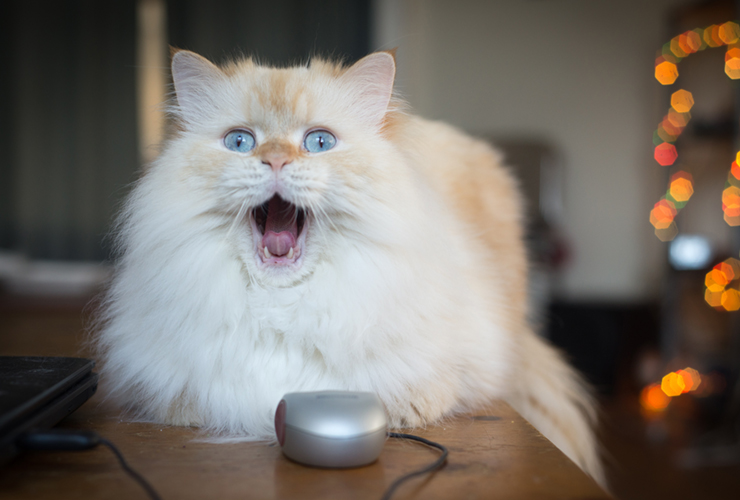 Some Italian sayings include cats impersonating human beings’ traits. This one refers to the absence of a figure of vigilance or control that allows someone to feel relieved and do what they want. But “the cat” sooner or later will return and there will be bitter consequences to face.

Giulia: “Tonight party at my house! My mother is away for the weekend.”

Literal: the mother of idiots is always pregnant. Idiomatic: there’s one born every minute.

In this expression there is all of Italian popular wisdom. The meaning of this Italian saying is, simply, that you will always end up meeting idiots, no matter where you go…because their mother is always pregnant, according to Italians.

You can turn to a friend and use it when you meet someone foolish or who does silly things.

You will hear this one very often in Italy. It describes a situation where you have to choose between two opportunities which are both appealing, but each one has its own pros and cons. And in the end, even if you want it all, you can have only one of the two.

Rodrigo: “ I’ve received two job offers: the first is quite boring but with a great salary, and the other with a low salary but far more interesting. I would like to have both! What do I do?”

Stefano: “You can’t have your cake and eat it too. Pick one.” Literal: (keep the) water in your mouth. Idiomatic: keep that to yourself.

Be very careful about gossiping and revealing your sources! When you talk about something sensitive, make sure your conversation-partner won’t blow your cover. Acqua in bocca is a very common Italian saying that Italians usually use to warn you that what they’re saying is for your ears only!

It’s a secret, keep it to yourself!

The meaning is pretty straightforward: return this thing to me when you’re done. This expression is usually used when you lend something of yours to someone else and you remember them to give it back.

Luca: Can you lend me your book on Michelangelo, please?

Carlo: Of course! But remember that it’s name is Jack and it has to come back. Literal: to be at the fruit course. Idiomatic: be at the bottom of the barrel/hit rock-bottom.

As you can imagine, this Italian saying refers to the habit of ending meals with a fruit course – meaning that you’ve finished your dinner or lunch. That’s why it commonly expresses a stage where a person has exhausted all energies and resources.

I don’t remember anything anymore. I must be at the bottom of the barrel.

Literal: I give so you give. Idiomatic: qui pro quo (a favore for a favor).

This last idiom in Latin is a peculiar one because English adopted a different one, also in Latin, qui pro quo – which actually means something instead of something else, a misunderstanding – to express what do ut des does.

With a qui pro quo sometimes you can obtain unexpected things.

This list ends here but Italian sayings do not. As a matter of fact there are tons of them related to family, friends, animals, love and of course more food and Latin words. It is just a start to get you more familiar with Italian idioms and expressions and to have fun mastering the language.

And remember Italians really like to play with words and proverbs because with just a few words you can express a whole concept, idea or feeling. So they are a must!

Enjoy and have fun with them!